The D-Day Festival celebrates the anniversary of the Normandy landings

Each year towns around the landing beaches pay tribute to the soldiers who fought in these places on June 06, 1944 and the following days. They also celebrate the renewed peace of Europe during the festivities of the D-Day festival.

The D-Day festival will liven up your stay!

While strolling on the various landing beaches, you will enjoy shows with sounds and lights, choirs, concerts, military exhibitions, parades, parachuting and many other activities located near our campsite in Normandy. 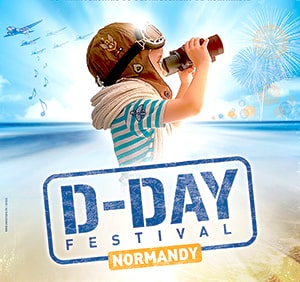 A rich and varied program to relive these historic moments 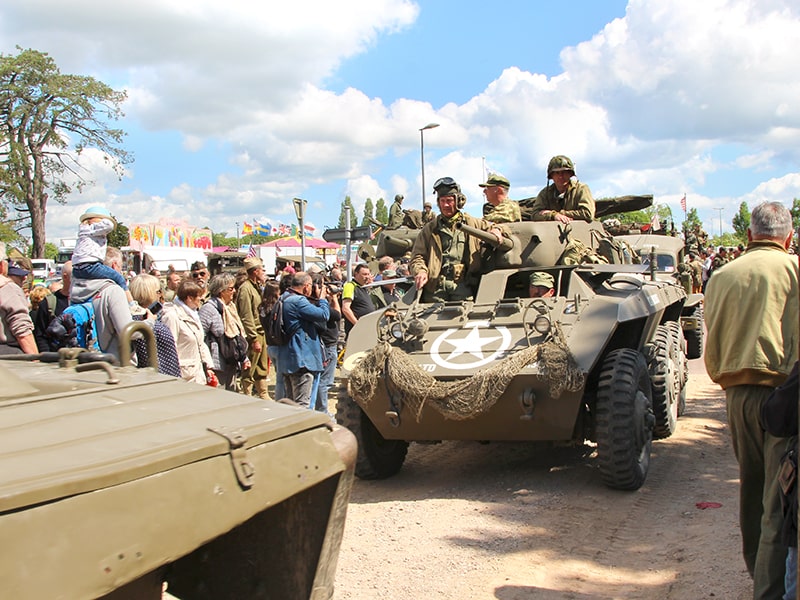 From the end of May the first events dedicated to the anniversary of the landing begin. In the Bay of Cotentin, the book fair generally start the festivities followed by the International March for Peace. Then many events will occur until mid-June.

A great variety of events is offered all along the coastal cities of Normandy: from southern Manche to eastern Calvados (Baie du Cotentin, Baie des Veys, Côte de Nacre …), but also in the land like Sainte-Mère-Eglise, Carentan, Bayeux and Caen.

A very large area of festivity where associations of remembrance, enthusiasts, traders, museums, municipality communities, town halls and tourist offices put everything in place to offer you a total immersion in the 40s.  Navy, land and air forces, firemen, National Police and National Gendarmerie are also present during official ceremonies and at military settlements

At the liberation of France the civilian population and armed forces feasted to celebrate the end of the Second World War. Today, all nationalities are invited to celebrate peace and fraternity between peoples during the D-Day Festival. Many festivities are organized on the occasion of each anniversary of the landing. 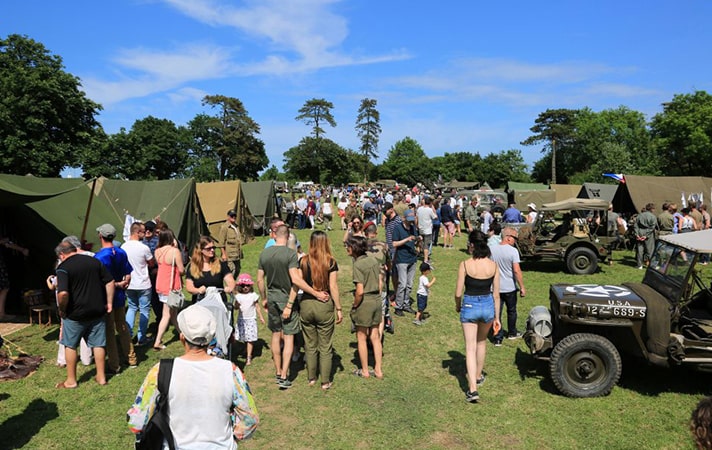 Take a stroll through the streets of the cities situated near the D-Day landing beaches to discover the exhibits of civil and military vehicles: motorcycles, tanks, original Jeep Willys, but also ships of the Second World War. Around you reconstructions of military camps take you back to 1944. Tents, outfits, weapons, posters …. Everything is planned to make you go back in time. Equipment lovers will appreciate the various military markets. Raise your eyes and see the C-47s that cross the sky to drop paratroopers in period outfits (including the famous airdrop of “La Fière”, the Purple Heart Lane and the Drop Zone T). You will also be able to attend the dropping of special forces in activity as well as the air shows of the Patrouille de France. 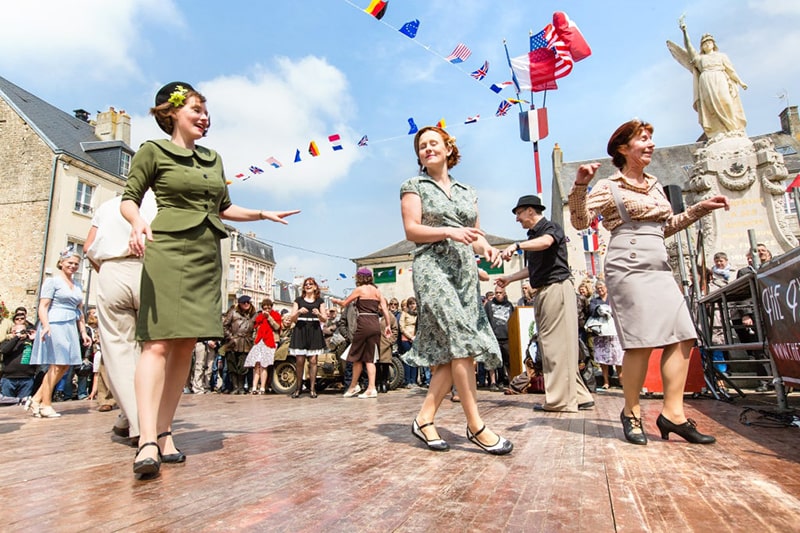 Immerse yourself in the world of the 40s by participating in musical parades, balls, jazz concerts, period and post-war music. A vintage atmosphere guaranteed thanks to the numerous parades of period costumes and the guinguette style decoration. The D-Day Festival is also outdoor film screenings, exhibitions, lectures and the World War II Film Festival.

To better understand D-Day sign up for a guided historical hike where fights took place. In the evening, fireworks and sound and light shows complete the festivities of the day.

Official Commemorations of the D-Day Anniversary

Numerous official ceremonies take place on and near the landing beaches to honor the soldiers who gave their lives to defend freedom. All the nationalities who took part in this world conflict are represented: American, British, Canadian, French, Norwegian, German … and even Comanche.

On this occasion, many foreign leaders travel to perpetuate the memory of these soldiers and spread a message of peace. Veterans are invited to testify their story. During these events, flowers are laid, new memorial plaques or monuments are inaugurated and sometimes a presentation of the legion of honour or green berets is organized. Fanfares played hymns of the different nations. Civil ceremonies are also organized in order to pay tribute to the resistance fighters and inhabitants, civilian victims of the landings.

During the 70th anniversary of the landing in 2014, French President François Hollande and US President Barack Obama were present at the Franco-American ceremony at the Colleville-sur-Mer American Cemetery. 10,000 people were expected. At the Cathedral of Bayeux, the Franco-British ceremony also gathered Queen Elizabeth II, Prince Philip, their son Prince Charles, Prime Minister David Cameron and French Prime Minister Manuel Valls.

Norway’s King Harald V and his Prime Minister Erna Solberg were also present at the Franco-Norwegian ceremony held in Hermanville-sur-Mer at the Norwegian monument “Le Matelot”.

For the 75th anniversary of the landing, Donald Trump and Emmanuel Macron met at the Colleville American Cemetery. In Courseulles-sur-Mer, Prime Minister Edouard Philippe presided at the end of the day a ceremony in the presence of Justin Trudeau, Theresa May and Prince Charles as well as many heads of state. French Prime Minister Edouard Philippe welcomed Prince Albert II of Monaco to Sainte-Mère-Église.

Some ceremonies that take place every year:

We celebrate the D-Day festival in the Cotentin Bay

In the Cotentin Bay, Sainte-Mère-Église and Carentan les Marais host many events, but smaller villages also participate in events such as Hiesville, Liesville sur Douve, Méautis or Picauville. You will also find military camps, vehicle exhibitions, concerts … The D-Day Festival is really everywhere in the Cotentin Bay in these few days.

Museums and places to visit offer special events on this occasion

Meeting with veterans, exhibitions, special screenings, conferences and guided tours, the Cotentin Bay strives to celebrate Peace. These days of celebration and tribute are also an opportunity to strengthen the bonds of friendship that unite us. It is thus traditional that the families of La Manche and Calvados welcome home the soldiers who came to celebrate the anniversary of D-Day. 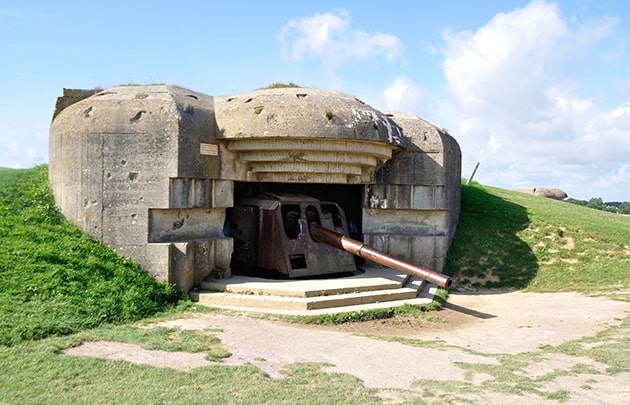 Walk on the historic D-Day places, from German batteries to Pegasus bridge.

Let you guided by Second World War history passionates to discover all the secrets of the landing places….

Think of everything before choosing your campsite near Utah Beach.