In low season, take advantage of our D-Day formula that will allow you to stay 2 nights in a beautiful Normandy campsite, located on Utah Beach, while exploring the history of the landing beaches with the Airborne Museum of Sainte-Mère-Église (tickets for the museum included).

* Price based on 2 people for 2 nights in a mobile home Cottage 2 bedrooms + 2 entrances to the Airborne Museum.

1 ticket/people for the Airborne Museum
5 maximum

Relive the D-Day at the Airborne Museum near Utah Beach

You have an appointment with History.

Located in Sainte-Mère-Eglise, 9 kilometers from the campsite, the Airborne Museum is a must stop on your D-Day tour and thanks to its playful side, it is an ideal activity for the whole family!

The museum traces the heroic epic paratroopers of the 82nd and 101st Airborne. From the preparation of the D-Day in England to the fights that led to Liberty, you will accompany the airborne troops on their way to Victory. You will embark on a C-47 plane and experience the night parachute drops on Sainte-Mère-Eglise. A unique experience that will leave you with wonderful memories!

The WACO building, recognizable by its parachute shape, houses a real WACO glider. More than 500 of these aircraft without engines were sent on D-Day to bring equipment, food and ammunition to the airborne troops but also a reinforcement of 4,000 soldiers.

In building C-47, attend the parachute preparations with General Eisenhower in the presence of a real C-47, an aircraft that carried out the dropping operations. Watch the realistic staging thanks to the many elements of collections: outfits, weapons and military vehicles.

The immersive journey “Operation Neptune” transports you into the skin of the soldiers of the time to relive the parachute drops of June 6, 1944 over Sainte-Mère-Eglise and the battles that followed in the villages and surrounding marshes. A museography rich in emotions!

Take your loved ones with you and come share a resourcing weekend in Normandy, very close to the beach. You will find in our mobile homes all the comfort you need and enjoy the warm atmosphere of the campsite: a perfect match to live a unique weekend and create wonderful memories.
Enjoy our 5-star camping facilities during your short stay, such as our indoor and heated swimming pool with paddling pool, sauna, playgrounds, sports fields, bar, grocery store, games room, park goat…

2 bedroom mobile home holidays for your stay in Normandy

Our mobile home Cottage in its 2 bedroom version has a master bedroom with a double bed of 140 cm, a child bedroom with 2 single beds of 80 cm and an additional sleeping space in the living room thanks to its convertible sofa. The living room is spacious and offers 3 distinct areas: the kitchen (gas hob, fridge, microwave, coffee maker, pots and pans, dishes), the dining area (dining table, chairs, television) and the sitting area with bench and coffee table. The bathroom has a shower and sink. The toilets are separated.

Relax on the sunloungers of the garden or on the outdoor terrace, on the garden furniture (drying rack also available). A real little holiday home for your stop in the Cotentin! 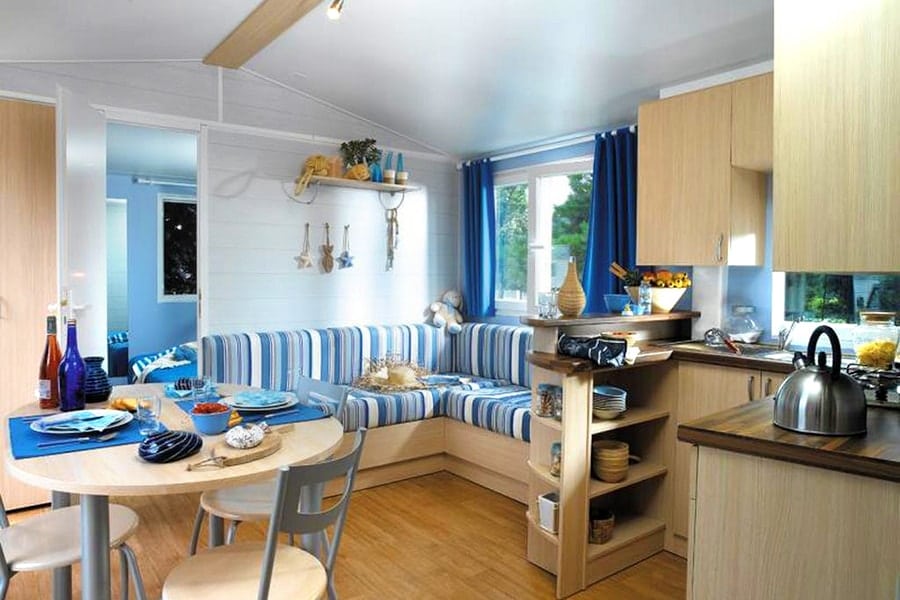 I book my short stay D day at the campsite

The Airborne Museum package is available at the following periods:

Can I book for more than 2 people?
Yes. The rate shown on this page is based on 2 people. However the offer can be proposed to you up to a maximum of 5 people. The price of the stay will then be recalculated according to the number of people.

When the soldiers landed on June 6, 1944, on the 5 landing beaches (Utah Beach, Omaha Beach, Gold Beach, Juno Beach and Sword Beach), the Battle of Normandy began. An incredible logistics is deployed to ensure the success of this global military operation. August 25, 1944 the city of Paris is liberated then all the France in May 1945.

The American sector of Omaha beach is the one that will denote the most losses being attributed the sad name of “Bloody Omaha” (Omaha the bloody). The Colleville-sur-Mer American Cemetery honors the memory of its American soldiers. The Memorial is an exceptional monument with a bronze statue seven meters high.

You can also admire the monument “Les Braves” erected on the occasion of the 60th anniversary of D-Day on the sand of Omaha beach landing beach in Saint Laurent sur mer. From 9 meters high, it honors the courage of the men who landed there on June 6, 1944. 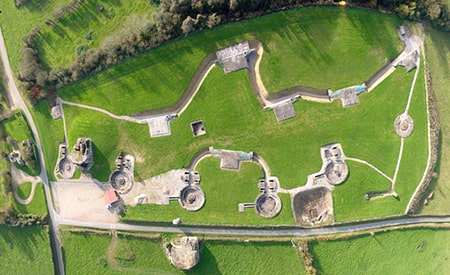 Go on an excursion to Normandy landing beaches to visit the remains and memorials. Many unbelievable stories that took place in the heart of the great history of the Second World War will be unveiled to you, such as the one when the fuel refueling point installed by the troops allied to Sainte Honorine losses which allowed the supply of vehicles to victory.

Other essential visits will complete your dday weekend, such as the artificial port of Arromanches les bains, the Crisbecq German battery, the D-Day Experience museum in Saint Côme du Mont, the Memorial Museum of the Battle of Normandy in Bayeux , the Memorial of Caen or the museum D-Day Omaha beach of Vierville sur mer …

Do not forget to visit the Atlantic Wall bunker-museum at Ouistreham, a former bunker that served as a command post and Tir Direction. Refurbished as a museum on its 6 levels, it is entirely dedicated to the Atlantic Wall.

Explore the depths of the oceans by visiting the Cité de la Mer Museum in Cherbourg. Submarine tour, aquarium, Titanic exhibition … Discover the riches and the unique universe of the seabed.

Learn more about this package

Golf weekend by the sea 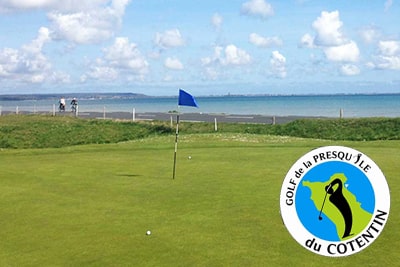 Practice your favorite sport with a view of the sea at the Cotentin Peninsula golf course. This trip includes a golf day for two people and two nights in one of our most beautiful mobile homes.

Learn more about this package